When I show people the results of their first Spinal Health Assessment they are often curious to see how much improvement is possible and how they compare to others. I do not believe it is healthy emotionally to compare yourself with others, but in this case it may be helpful to understand what improvement is possible for you by using a comparison.

I have changed the names of these patients to protect their identity. We will call them John and Paul.  Both John and Paul came to us following a very similar car accident. Both of them were in a lot of pain but John was definitely worse. John’s SHA score on his first assessment was 21. Paul’s score was 29. Over the course of several months, John received 37 adjustments while Paul received 32. After those visits, they were released from their personal injury care. Both individuals received a Spinal Health Assessment at the conclusion of their care. John’s final SHA score had improved to72 and Paul’s score had improved to 47. The table below summarizes: 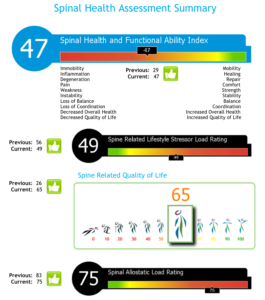 John had obviously better results than Paul. So the good question to ask is why were the results so different? It boils down to this one thing: Lifestyle.

John did not receive “better” adjustments than Paul. Both had times when they were not consistent with the frequency of their care. Both of them were intermittent with their spinal hygiene. Everything regarding their care in our office and home care was pretty similar. The only significant difference was the overall lifestyle they lived before their accidents and after.

John loves to be outdoors. He loves to hike and backpack. He loves to be active. In addition to his active lifestyle, he nourishes his body relatively well. He has a stressful job but his emotional health is good and he has habits in place to relieve stress.

Paul also has a stressful job but it requires sitting for long periods. He has a history of fatigue and therefore does not exercise. His diet is less than nutritious. Emotionally he has many problems to deal with and does not have habits to assist him and as a result does not have an optimistic outlook on his life.

This is only a comparison between 2 individuals but as a chiropractor I’ve seen that the people who have the best results do more than just get adjusted.