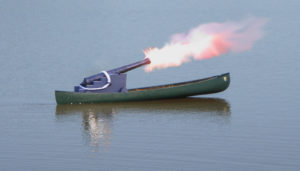 Would you want to shoot a cannon from a canoe or from a battleship? Seems like a silly question but work with me as I draw an analogy to your spinal health.

A battle ship is large and stable. A canoe is not large or nearly stable enough to support the weight of a cannon or the force from it being fired.

Your back must have both strength and stability or it will be just like shooting a cannon from a canoe. It must be strong enough to lift things but stable enough for the small muscles of your back to not tear when you do.

If a large muscle group, QL, is having a tug-of-war with a small muscle group, multifidus, who’s going to win? The QL. The big guy will always win. This is the reason someone is going to say “their back just went out.” Or in other words they have pain. The pain has nothing to do with position. It has everything to do with the big guy pulling on the joint more than the small guy and the small guy tears or strains. The coordinated movement of the transducers and the large muscle groups, working harmoniously together means you will not “pull” anything.

There’s some pretty cool neurology that goes into the purpose of transducers and the dynamics of back movement regarding proprioception and nociception that I will cover in another article. The take away from this article is that you must have stability and strength in order for the large groups to work with, not against the small groups. One way is to have core strength.

If your core is not physically strong enough you will be prone to asymmetrical muscle contraction which will lead to poor spinal health, with or without symptoms. This is like shooting a cannon from a canoe. If there is sufficient strength to your core then it will be stable enough to withstand the opposing forces that are required for proper movement.

Make a plan to create battleship like strength and see how your life improves.